Laser treatment of varicose veins in the lower extremities

A disease in which the veins enlarge, dilate and lose elasticity is known as varicose veins. The result of the disease is not only a noticeable aesthetic defect, but also the formation of ulcers, which is accompanied by severe pain. Laser treatment of varicose veins in the lower extremities is one of the most modern and painless methods of eliminating the disease.

Transcript of the procedure 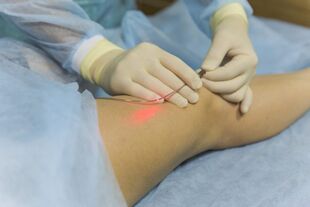 The laser treatment of varicose veins is performed using a duplex ultrasound scanner. In this case, the laser energy is absorbed by the hemoglobin of the erythrocytes.

As a result, in a few seconds they are converted to thermal energy, whose value reaches 100 degrees. Blood plasma and its elements boil. This process can be compared to a kind of thermal burn of the walls of the veins, which causes the formation of a blood clot.

After a short period of time, the veins dissolve and become almost invisible. If the disease is in an advanced form of development, it is necessary to repeat the operation. This cannot be done before 30-40 days.

The method's popularity is due to its inherent advantages. Among the most significant are the following:

The presence of these and other advantages confirms the effectiveness and efficiency of the laser varicose vein removal procedure.

Laser treatment of varicose veins is indicated for patients diagnosed with enlarged great and small saphenous veins. In this case, the size of the expansion of the venous orifice does not exceed 1 cm, and the vessels are located uniformly, without the formation of numerous curves.

The use of a laser will be effective only when the disease is in an early stage of development.

For whom this method is prohibited 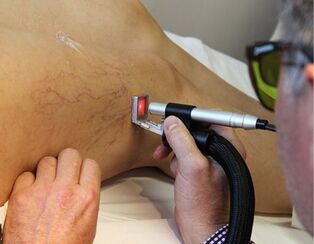 Laser removal of the leg veins is not recommended if the disease is in the second, third or fourth stage of development. The reason is that it is possible that the vein will widen again.

In addition, it should be noted that the laser acts on a small area of ​​the vein, which prevents damage to the surrounding tissues. If a person has large venous lesions, the use of laser therapy will not give the desired result.

If we talk about contraindications for the use of lasers, they can be conditionally subdivided into 2 groups:

In these cases, the use of lasers can cause massive blood clots.

If a patient has contraindications in the first group, experts recommend that he use a different method of treating varicose veins. If there are relative contraindications, it is necessary to eliminate them before using laser therapy. 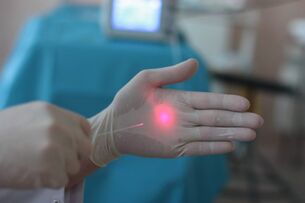 One of the advantages of venous laser treatment is that the patient does not have to go through a long preparatory period.

Preparation before the operation consists of conducting a standard examination, which includes the following manipulations:

After completing these manipulations, you can proceed to the operation itself.

Which method to choose

In addition to laser endovasal coagulation, several effective methods can be used to treat varicose veins. Among the most popular are the following: 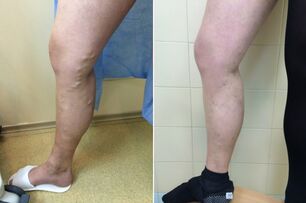 Of all the above methods, EVLO varicose veins is the most gentle and effective. The final decision on choosing a varicose vein treatment method can only be made after a thorough general examination and the recommendation of a specialist phlebologist.

Removing varicose veins with a laser is a manipulation that takes no more than 30 minutes. It is carried out in several stages:

In order not to damage the mucous membrane of the eye, the patient must first wear goggles.

One of the advantages of the laser vessel coagulation method on the legs is that the operation itself does not take more than 30 minutes.

After this period, the patient can leave the clinic on his own. The short duration of the method is due to the absence of general anesthesia, as well as surgical incisions on the skin surface in the patient's legs.

Laser therapy for varicose veins involves a short postoperative period. In order to be approved correctly, experts recommend that the patient follow the following rules:

Within 2-3 months, the patient is fully recovered and ready to lead a normal life.

If laser vein surgery is performed in a timely manner, the likelihood of the disease coming back again is very low. The patient returns to his normal and usual way of life after a few months.

The negative consequences after surgery to remove varicose veins in the legs are very rare. As a rule, it can be a light pigmentation of the skin in the places where the puncture was performed. It can be eliminated with medication.

It is safe to say that the cost of laser treatment of varicose veins in the legs is the only disadvantage of the method. It depends on factors such as the degree of development of the disease, the equipment used for the operation, the individual characteristics of the patient and other factors.

Despite the high cost, this method is recognized worldwide as the most effective.